There are many Advent traditions to consider when deciding how to deepen your family's experience of the Advent season. We have the Advent wreath, Advent calendar, Advent prayers and songs and Advent saints. Below, we offer still more. These include: the Jesse tree, Las Posadas, St. Nicholas and the nativity scene.

If looking for an overview of these traditions specific to young children, consider these resources: Using Advent Crafts to Teach Your Children the Faith; Advent and Christmas Crafts and Activities for Kids; Advent and Christmas Ideas for Kids on Pinterest; Advent Games/Puzzles for Children; and Advent Lesson Plans for Grades 1-8. Visit Simply Catholic to learn about the origins of these traditions. Or discover new ones to try from Busted Halo.

This Advent tradition introduces Jesus' ancestors and shows how Jesus is descended from King David, uniting the Old Testament with the New Testament. The name comes from Isaiah 11:1: "A shoot shall come out of the stock of Jesse, and a branch shall grow out of his roots." Jesse was the father of King David. 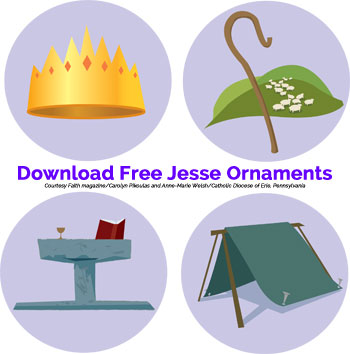 Ornaments that illustrate the events leading up to Christ's birth adorn the Jesse Tree, connecting this Advent custom with decorating a Christmas tree. The Diocese of Erie, Pennsylvania makes its Jesse Tree ornaments available for free to download here. They are also offer Advent reflections to go with them. Here are other resources you might enjoy as well:

Las Posadas, which means "the inns," is an Advent custom celebrated in Mexico, Guatemala, El Salvador and other Latin American countries. It begins on Dec. 16 and continues through Christmas Eve. This novena is a reenactment of Mary and Joseph's search for lodging as they traveled from Nazareth to Bethlehem. 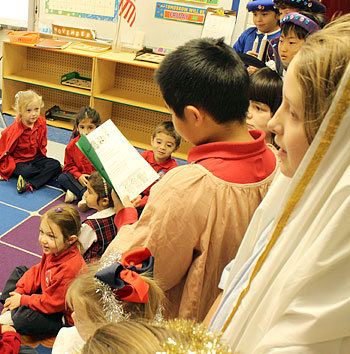 Traditionally, people gather in two groups, an outside group and an inside group. The outside group goes to the door of a house and someone knocks at the door. Together, the group sings traditional Advent and Christmas carols or villancicos asking for shelter. Those inside respond in song, denying shelter, saying there is no room at the inn or posada.

The outside group does this three times. On the third time, the group finally gains entrance. As the group walks in, both groups sing a song in Spanish about holy pilgrims or travelers. The group prays the rosary, followed by a little fiesta, which might include hot chocolate, cookies and perhaps even a piñata for the children.

Sometimes, the last posada is held at the parish and the pilgrims enter as part of the processional for midnight Mass. Learn more about this tradition or visit our Calendar of Events  or contact a parish or school near you to find a Las Posadas event in your area.

St. Nicholas was a fourth-century bishop of Myra, a city in Lycia, a province of Asia Minor. He is known for his generosity to the poor. His feast day is celebrated on Dec. 6. There are many traditions to celebrate this saint's feast day but the most common for families is the custom of the shoes. Family members leave their shoes outside their bedroom doors or on the fireplace hearth leaving a carrot for St. Nicholas' horse to eat on St. Nicholas Eve. 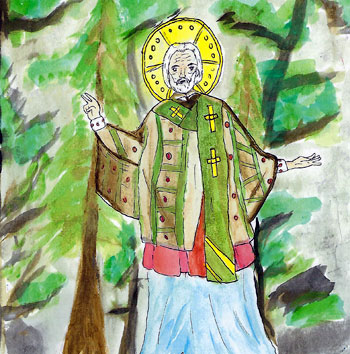 Sometime during the night, St. Nicholas visits and leaves gifts in the shoes. Any gift can be given, but traditional gifts include gold coins or a candy cane to represent St. Nicholas' crozier (staff carried by bishops to represent their role as shepherd).

Another way to celebrate this feast day is to follow St. Nicholas' example and give to the poor anonymously. Catholic Charities of Arkansas offers you a great way to do this by becoming a St. Nicholas Partner. For more information about the real St. Nicholas or see more ideas for celebrating, visit the following resources:

St. Francis of Assisi set up the first Nativity Scene on Christmas Eve in 1223. He invited villagers and friars from Greccio, Italy, to gather for Mass at his manger. He set it up in a cave with live animals and feeding trough converted into a crib. He said, “I want to do something that will recall the memory of that child who was born in Bethlehem, to see with bodily eyes the inconveniences of his infancy, how he lay in the manger, and how the ox and ass stood by.” 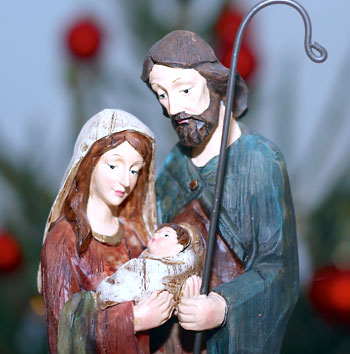 The tradition grew and people began constructing nativity scenes in their homes. A nativity scene or crèche may be made from various materials. Many set up their entire scene at the beginning of Advent, leaving the crib empty for the Christ child to arrive on Christmas Eve. Others set it up slowly, day by day. Mary and Joseph can also "travel" to Bethlehem, as they move slowly across the room each day until they reach the manger.

In a new apostolic letter, "Admirabile Signum," released Dec. 1, 2019, Pope Francis writes about the meaning and importance of nativity scenes, encouraging us to look at them with fresh eyes. He offers five recommendations on how the Christmas crèche can help us to better appreciate the gift of the Incarnation this Advent. Learn more from the following resources: