Stations of cross help us deal with suffering

Click on the button above to find several options to pray the stations of the cross at home, including our own Way of the Cross: Stations and Meditations from Arkansas.

“If anyone wishes to come after me, he must deny himself and take up his cross daily and follow me.” (Luke 9:23)

From the earliest days of Christianity, pilgrims have journeyed to Jerusalem to walk in the footsteps of Christ's passion on the road to Calvary. Tradition holds that Mary, the mother of Jesus, herself led by example in making daily visits to the sites of her Son's sufferings, death and resurrection following his ascension into heaven. More than 2,000 years later, Christians are still meditating on his crucifixion through what has come to be known as the stations of the cross.

Also called the "way of the cross" or "via crucis" this private devotion has consisted of 14 stations, taken both from Scripture and tradition, since the 18th century when the Church officially approved the now common Lenten practice. Through the stations, Christians have been able to spiritually journey to the Via Dolorosa (Latin for "Way of Sorrows" or "Way of Suffering") in Jerusalem without actually going there. 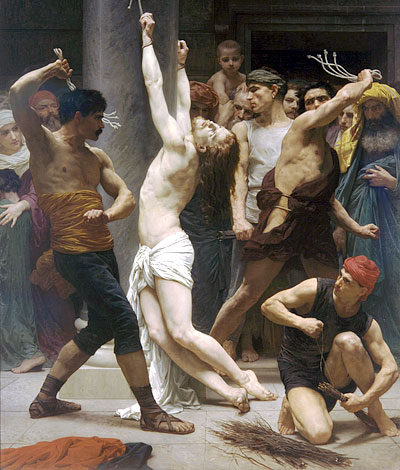 Beginning with Christ's condemnation all the way to his body being laid in the tomb, each "station" or "stop" allows modern-day pilgrims to meditate through various methods of reflection and prayer that are fitting to a particular community. Most of the stations can be found in Scripture, but five come from Church tradition: Jesus meets his mother; Veronica wipes the face of Jesus; and his three falls. Some churches also have a 15th station focusing on the resurrection. | Go to How to Pray the Stations.

Born out of widespread devotion to the passion of Christ in the 12th and 13th centuries, the stations of the cross, as a devotion, did not begin to develop until the Franciscans were granted custody of Christian sites in Jerusalem in 1342, according to the New Catholic Encyclopedia. St. Leonard of Port Maurice became known as the "Preacher of the Way of the Cross" in the 18th century because he is credited with erecting more than 572 stations between 1731 and 1751. Today almost every Catholic church has a set of the stations somewhere on the church grounds.

Beyond the general structure, people are able to make the stations personal by customizing meditations to suit their spirituality, age, culture or gender or focus on a particular issue to help them learn about the struggles of others. And parish communities customize their stations as well from beautifully ornate, works of art to simple, outdoor, wooden crosses to live stations with people reenacting the events of Jesus passion and death.

Though the approach of the stations may vary widely, all are designed to draw people into Christ's passion. Why? Because that connection to Christ's suffering helps us have a greater understanding of our own sufferings as well as those of others, explains Michael Heinlein, editor of Simply Catholic. "The universal reality of suffering makes devotions inspiring meditation on the passion and death of Jesus particularly relevant in Christian life," he said.

St. John Paul II in his apostolic letter on suffering, "Salvifici Doloris," explains the purpose of suffering is rooted in love. "... we are conscious of the insufficiency and inadequacy of our explanations. Christ causes us to enter into the mystery and to discover the 'why' of suffering, as far as we are capable of grasping the sublimity of divine love. ... This answer has been given by God to man in the cross of Jesus Christ." (no. 13)

"Out of love, Christ gave of himself completely, even unto death — handing over his spirit out of obedience to the Father’s will," added Heinlein. (See Luke 23:46) He summed up his article by referring to Pope Benedict XVI's thoughts following the death of Pope John Paul II. "Jesus not only taught us how to pray the stations of the cross, but also their meaning. 'The way of the cross is the path of losing ourselves ... the path of true love.' Suffering expresses love’s total self-emptying required of the disciple. 'For whoever wishes to save his life will lose it, but whoever loses his life for my sake will save it.'" (Luke 9:24)

How to pray the stations

The following is the most common approach when practicing this Lenten devotion:

Online resources to pray at home

Several resources are available to help you do the stations, depending on your needs. These include: the classic way of the cross by St. Alphonsus Liguori or St. Francis of Assisi; scriptural stations in English and Spanish from the U.S. bishops; reflections using the Examen of St. Ignatius’ Spiritual Exercises; online stations from the Way of the Cross: Stations and Meditations from Arkansas, CRS Rice Bowl, Busted Halo and several offerings from Catholic TV; and station reflections focusing on the elderly; youth and young adults; teens; college students, racism; and children from Catholic Icing or Teaching Catholic Kids.