The Solemnity of Sts. Peter and Paul, Apostles is celebrated on June 29. Though it is a solemnity, it is not a holy day of obligation. The tradition of honoring these saints on the same day goes back to the early Church. “Both apostles share the same feast day, for these two were one; and even though they suffered on different days, they were as one. Peter went first and Paul followed. And so we celebrate this day made holy for us by the apostles’ blood. Let us embrace what they believed, their life, their labors, their sufferings, their preaching and their confession of faith.” — St. Augustine of Hippo in 395 A.D. 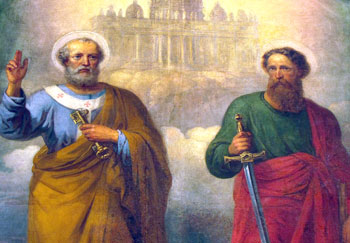 According to tradition, St. Peter felt he was not worthy to die in the same manner as Jesus, so the Romans crucified him upside down with his head pointed downward. The small, inverted crosses in the Diocese of Little Rock crest pay tribute to the manner of his martyrdom.

Jesus chose Peter to lead his Church. "And so I say to you, you are Peter, and upon this rock I will build my church, and the gates of the netherworld shall not prevail against it. I will give you the keys to the kingdom of heaven. Whatever you bind on earth shall be bound in heaven; and whatever you loose on earth shall be loosed in heaven.” (Matthew 16:18-19)

Unlike St. Peter, St. Paul only became a follower of Jesus after his death and resurrection. In fact, he persecuted Christians until he encountered Jesus on the road to Damascus. His conversion was life-changing. He became known as the Apostle to the Gentiles and devoted the rest of his life to spreading the Gospel of Christ.

"For I am already being poured out like a libation, and the time of my departure is at hand. I have competed well; I have finished the race; I have kept the faith. From now on the crown of righteousness awaits me, which the Lord, the just judge, will award to me on that day, and not only to me, but to all who have longed for his appearance." (2 Timothy 4:6-8) Since Paul was a Roman citizen, he was beheaded by Roman authorities.