God wins hearts when we journey through the desert

Within six months before diaconate and priestly ordinations, a man takes a five-day preparatory retreat. I was excited to begin the spring semester this way and spent the week in a desert retreat center with the three other seminarians who will be ordained this May. Between the daily conferences, there was time for silent reflection, hiking into the foothills, reading and rest. 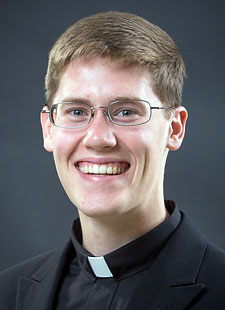 For me, those hikes are where the graces given in the conferences were stirred up and experienced more deeply. On one walk, I wrestled with a quotation I saw on a votive candle earlier in the chapel that unsettled me: “I will lead you into the desert.” It was an adaptation of Hosea 2:16, in which God tells Israel that he will lead them into the wilderness to persuade them of his love for them. It seemed like a far-fetched plan to me.

Just so, in our journey through the desert with God, there is the possibility for pain as things that hinder our thriving are stripped away, and what is central to the fullness of life is nourished.

It was unlikely that Israel forgot the 40 long years of wandering through the desert on the way to the Promised Land, with plenty of cacti, scorpions and scorching heat. As I picked needles out of my arm, I initially sympathized with Israel. After a week of hiking, though, I began to appreciate why God values the desert when winning hearts. In such hostile terrain, where everything seemed to bite, I realized my vulnerability.

Compared to the rough rocks, coiled rattlesnakes and prickly pears, I was a squishy biped in great need of water. The desert also revealed my dependence. Many of the trails were a maze of washes formed by flash floods or game trails owned by coyotes and javelinas that weaved through the brush. It was easy to become lost.

Life in the desert thrives only by clinging to the most essential: water, food and shelter. Anything else is a distraction and can work against survival. These physical realities hint at deeper spiritual truths. Israel in Hosea’s time had become distracted by wars, alliances with foreign nations and the influence of pagan values. All of this undermined their trust in God. As they relied less on him, they struggled to survive as a nation. Hosea used beautiful marriage imagery to describe God’s intervention to win the hearts of his straying people, and it is in this context that I also see God leading us, his beloved, into the wilderness.

In marriage, a man and a woman commit to love each other fully, and they sacrifice to strengthen and purify that love. No marriage is without sunburns and prickly pears, but seasoned spouses know that the life-giving essential in their relationship is God, and their perseverance deepens their love. Just so, in our journey through the desert with God, there is the possibility for pain as things that hinder our thriving are stripped away, and what is central to the fullness of life is nourished.

My desert retreat was a fitting preparation for ordination. The trackless wilderness invited me to trust again more deeply in Jesus as the way and life, as the source of living water. Deserts in life offer us all the chance to reassess what or who we trust in to thrive and choose God.

John Paul Hartnedy, a member of St. Edward Church in Little Rock, is a diocesan seminarian attending Assumption Seminary in San Antonio, Texas. This article was originally published in Arkansas Catholic. Copyright Diocese of Little Rock. All rights reserved. This article may be copied or redistributed with acknowledgement and permission of the publisher.

St. Joseph: What I hear when the ‘silent saint’ speaks to me

Why be Catholic? I have my four passionate reasons

God wins hearts when we journey through the desert

Lesson from St. John: Power of the cross found in love

God the Father can evoke positive and negative feelings