Bishop Anthony B. Taylor formally dedicated the new Catholic mission in Decatur (Benton County) Blessed Stanley Rother Catholic Church on Sept. 24, making it the first in the world to carry the patronage of the Oklahoma priest and martyr, who was beatified in Oklahoma City on Sept. 23. 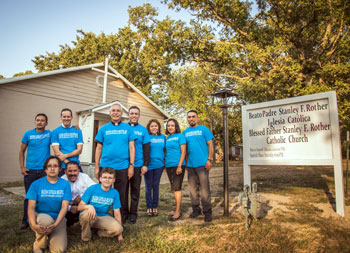 Fr. Salvador Márquez-Muñoz celebrated the first official Mass in Decatur in March 2014. Since that time the Catholic community has grown to about 80 parishioners who have a weekly Spanish Mass in a rented former Baptist church located at 758 Hill Avenue.

Bishop Taylor, also a native of Oklahoma, served as episcopal delegate for Blessed Rother's sainthood cause from 2007 until he was named the bishop of the Diocese of Little Rock in 2008.

"Everything I know about Blessed Stanley tells me that he would be delighted to have you as the first community in the world named after him," the bishop said during his homily Sept. 24. The mission is made up of immigrants from Guatemala, El Salvador and Mexico.

"Your becoming established formally as a mission is due in large measure to your commitment to Jesus Christ and the initiative you have taken to live your Catholic faith in a place where previously there had been very few Catholics."

"In addition to the main church he served in Santiago Atitlán and the mission church in Cerro de Oro, Blessed Stanley also served many small, isolated communities in the villages and plantations in the area. Sort of like you here in Decatur, who are a long way from anywhere. And, of course, your community includes quite a few Guatemalans, which makes Blessed Stanley a doubly appropriate patron for your community. He is not only the first beatified martyr of the United States, he was also the first beatified martyr of Guatemala," the bishop explained.

To learn about the dedication in Decatur, visit Arkansas Catholic or read the bishop's homily. For Mass times and contact information about this new mission, visit our parish directory.

"Your becoming established formally as a mission is due in large measure to your commitment to Jesus Christ and the initiative you have taken to live your Catholic faith in a place where previously there had been very few Catholics," Bishop Taylor said. "I know you still have a lot to do, but I’m very impressed by how much you have grown so far. I’ll bet some of you are already working on figuring out how to get a more adequate building, with more meeting space and more parking. And I’m confident that through your efforts, all things will fall into place in due time."