Way of the Cross in Arkansas

What are the Stations of the Cross?

From the earliest days of Christianity, pilgrims journeyed to Jerusalem to walk in the footsteps of Christ's passion on the road to Calvary. Tradition holds that Mary, the mother of Jesus, herself led by example in making daily visits to the sites of her Son's sufferings, death and resurrection following his ascension into heaven. More than 2,000 years later, however, Christians are still trying to grasp the saving gift of Jesus by meditating on or reenacting his crucifixion through what has come to be known as the stations of the cross. 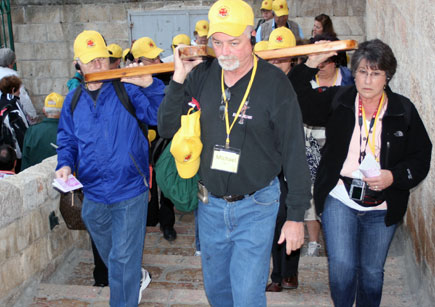 Also known as "way of the cross" or "via crucis" this private devotion has consisted of 14 stations, taken both from Scripture and tradition, since the 18th century when the Church officially approved the now common Lenten practice. Through the stations, Christians have been able to spiritually journey to the via dolorosa (Latin for "way of sorrows" or "way of suffering") in Jerusalem without actually going there. Beginning with Christ's condemnation all the way to his body being laid in the tomb, each "station" or "stop" allows modern-day pilgrims to meditate through various methods of reflection and prayer that are fitting to a particular community.

In the Diocese of Little Rock, communities young and old from every walk of life have taken part in this devotion. Styles ranging from the traditional meditations of St. Alphonsus Liguori to contemporary reflections using Top 40 pop songs have been employed. The stations have been prayed in the beauty of the outdoors, reenacted live and contemplated through the silence of pantomime. Though the methods vary widely, all of them have the common goal of bringing people into a closer connection with Christ's sacrifice. In places where permanent "stations" or visual markers for the devotion are displayed, like on the walls of a church, the images usually found on each station also tell the story of salvation without using words.

Born out of widespread devotion to the passion of Christ in the 12th and 13th centuries, the stations of the cross, as a devotion, did not begin to develop until the Franciscans were granted custody of Christian sites in Jerusalem in 1342, according to the New Catholic Encyclopedia. St. Leonard of Port Maurice became known as the "Preacher of the Way of the Cross" in the 18th century because he is credited with erecting more than 572 stations between 1731 and 1751.

Today almost all Catholic churches have a set of the stations somewhere on the church grounds. In recent years, the Church has supported a set of stations that are more scripturally based. The common form contains five stations from Church tradition: Jesus meets his mother, Veronica wipes the face of Jesus and his three falls, according to the Catholic Prayer Book.

Excerpts taken from an article published in Arkansas Catholic Feb. 21, 2004. Copyright Diocese of Little Rock. All rights reserved. This article may be copied or redistributed with acknowledgement and permission of the publisher.