The 12 stained glass windows in Morris Hall Chapel depict saints whose lives are associated with priestly life or missionary work of the Church.

Born in France in 1873, St. Theresa lived her short life as a Carmelite nun from age 15 until her death in 1897. Patroness of missions, she is known for her “little way” of quiet acts of love, humble suffering and simple trust in God alone. 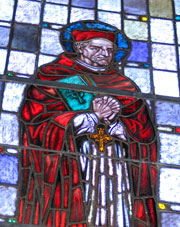 Patron of seminarians, Charles (1538-1584) was the driving force behind the later sessions of the Council of Trent. As Bishop of Milan, he lived simply devoting his personal wealth and the Church’s resources to helping the poor and sick, especially during the plague of 1576.

Patron of foreign missions (1506-1552), St. Francis was a good friend of St. Ignatius of Loyola and became one of the first Jesuits in 1534. As a priest, he worked in India, Malaysia, and Japan where he was the first Christian missionary. He died on his way to bring the Gospel message to China.

Patron of vocations, St. Philip (1515-1595) lived most of his life in Rome. Known for his wit and charm, Philip gathered lay people for discussions and informal prayer and encouraged these groups to serve the needy. This eventually led to his founding the Congregation of the Oratory. Philip was also renowned in Rome as an outstanding confessor. 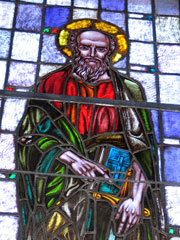 Apostle to the Gentiles, Paul’s letters form an essential part of the Church’s theological foundation. The ultimate preacher and missionary, he died as the Roman citizen -- by the sword.

“James the Greater” was an apostle and brother of St. John the evangelist. James is said to have preached the Good News in Spain and to have been the first apostle martyred. This window honors Msgr. James E. O’Connell who was rector of the seminary from 1944 to 1967.

Patron Saint of St. John Catholic Center, John was the son of Zechariah and Elizabeth, Mary’s cousin. A great prophet, John’s purpose was to prepare the way for the Lord and direct his followers to the Lamb of God. This window honors Bishop John B. Morris, who founded St. John Home Mission Seminary in 1911.

Patron of priests, John is known as the “Cure of Ars” (1786-1859). A priest of Ars, France, John was a tremendously famous confessor sometimes celebrating the sacrament of reconciliation for as many as 12 hours a day. 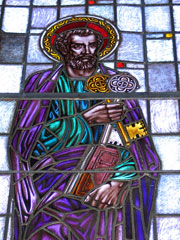 “The Fisherman”; apostle; preacher; author of books in the New Testament, first bishop of Rome; first pope. Crucified upside down, Peter was martyred during the persecution of Nero.

A Dominican, Thomas is known as the “Angelic Doctor”. A prolific writer and intellectual giant, his most famous work is the "Summa Theologica". Patron of Catholic education, he lived from 1225 to 1274.

Perhaps best remembered for his encouragement of frequent Communion, especially by children, Pius was pope from 1903-1914. A beautifully humble man, Pius X lived and preached a life of simplicity and heartfelt humility. Not yet canonized at the time the window was made, Pius is the only saint depicted without a nimbus (halo). He was canonized in May, 1954.

Bishop, scientist and teacher of St. Thomas Aquinas, Albert lived from 1206-1280. He was a famous Dominican preacher and philosopher who pioneered the reconciliation of Aristotelian thought with the Christian faith. This window honors Bishop Albert L. Fletcher (1946-1972).