“If a person cannot find anyone to teach him how to pray, let him take this glorious saint for his guide, and he will not lose his way.” — St. Teresa of Avila referring to St. Joseph

We celebrate the Solemnity of St. Joseph, husband of the Blessed Virgin Mary on March 19. Though the feast of St. Joseph is a solemnity, which is the highest rank of liturgical celebrations, it is not a holy day of obligation. St. Joseph, the spouse of Mary, the mother of Jesus, and the legal father of Jesus according to Jewish law, is a model of humility and obedience to God’s will.

He followed God’s instructions, given by angels in dreams, and took the pregnant Mary into his home as his wife, protected her and Jesus at the child’s birth in Bethlehem through the family’s sojourn in Egypt, and provided for them as a carpenter in Nazareth. This feast, which was celebrated locally as early as the ninth century, became a universal feast in the 15th century, when it was placed on the liturgical calendar. Pope Pius IX named St. Joseph patron of the universal Church in 1870; he is also the patron saint of carpenters, the dying, and workers. 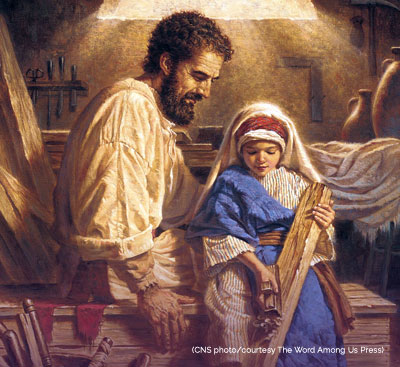 Pope Francis declared a year dedicated to St. Joseph to mark the 150th anniversary of St. Joseph being declared patron of the universal Church. It ended in December 2021. "With a father’s heart: That is how Joseph loved Jesus," the Holy Father explained in his apostolic letter, "Patris Corde" ("With a Father's Heart"). The pope also offered personal reflections on how St. Joseph is like the "ordinary people" who have been our heroes during the COVID-19 pandemic.

"Each of us can discover in Joseph — the man who goes unnoticed, a daily, discreet and hidden presence — an intercessor, a support and a guide in times of trouble. St. Joseph reminds us that those who appear hidden or in the shadows can play an incomparable role in the history of salvation," Pope Francis added.

Though he is rarely mentioned in the Bible, the Church has seen St. Joseph as a role model and guide for centuries. Before Pope Francis, St. Pope John Paul II highlighted St. Joseph to explain the Catholic understanding of fatherhood in his 1989 apostolic exhortation, "Redemptoris Custos" ("Guardian of the Redeemer: On the Person and Mission of St. Joseph in the Life of Christ and the Church").

A popular tradition on St. Joseph feast day is the St. Joseph Altar or St. Joseph Table. Arkansas Catholic describes the tradition in parishes and organizations in our diocese. There are several online resources to help you put together this celebration at home, including: "St. Joseph Altar For Beginners," "Foods for St. Joseph's Altar" and a "Blessing of the Saint Joseph Altar."

The U.S. Conference of Catholic Bishops (USCCB) composed a Novena for the Solemnity of St. Joseph to be prayed yearly on March 10-18, the nine days that precede the feast on March 19. Each day of the novena will be accompanied by a reflection video from bishops across the United States. The novena may also be adapted for use at other times of the year, especially feasts celebrating St. Joseph and occasions when his intercession is sought by the faithful. The USCCB Respect Life Office also offers a Novena to St. Joseph: For Those on the Path of Adoption. Sign up here to get daily novena prayers by email.