Attends the House of Formation in Little Rock 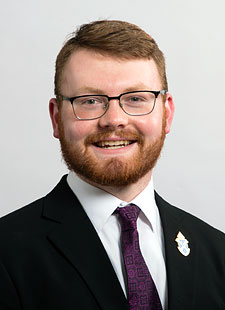 If you had asked me what I wanted to be when I was very young — maybe before the age of eight — I would have told you I would be a surgeon.

If you asked me why, I would have kindly informed you that surgeons make the most money (so why would you want to do anything else?). I’ve since learned that half of making a good decision is asking yourself the right questions. I was asking a question that was innocent, though ultimately useless nonetheless.

When I (finally) reached the second grade, several things were going on within me at the same time to cause a change in my view of the world, myself and my future. It was about that time when I started to notice the gaping disparity between what the world told me about what I should do or how I should act and what the Lord had to say about it.

What began to become clear to me was that instead of asking what would make me the most money or the most “successful,” the correct questions were: What is the deepest part of me longing for? Who is the person I am supposed to be? How can I let myself be God’s tool?

Now I know what you’re thinking, Wow, what an astute eight-year-old he was. I may be representing these ideas more clearly than they occurred to me at the time; however, God was certainly moving within me and calling me to know him better, or to know him at all.

At the same time, the second grade, our religion classes had turned from memorizing basic prayers to focusing on our upcoming first Communion. I was being taught some very intense ideas (“This is Jesus’ body and blood”), and they seemed, if true, to demand of me more belief, devotion, attention.

And to be honest, this sacrament marked the first time I encountered the Lord and realized it. I can remember on the night of my first Communion and several of my following receptions of the Blessed Sacrament, I had to try to hold back my smile. And so, at that ripe age, I felt the Lord’s call and decided (inasmuch as eight-year-olds can make decisions on such matters) that I would make of my life a priest, with all of the innocent and idealistic notions that accompany a young faith.

As everyone knows, our faith should mature over time. Mine certainly has. But I’ve tried to hold on to the desire to do God’s will as best I know it. And the Lord’s joy, the joy that made me smile that night years ago, has remained constant, giving me the strength to continue following him despite some challenges.

The last year of high school was tough. I was faced with the opportunity to follow the paths of all of my friends. Being truthful, going down a “road less traveled” can be very difficult. It requires holding on to what you know to be most fundamentally true, and a whole lot of trust in Jesus. But the support of my Church and God’s grace have made it possible for me to enter, despite my doubts, and not look back on the things I gave up for the Lord.

Now in my third year of college seminary, my spiritual relationship with the Lord has changed and deepened, but my belief in my call stays the same. I’ve become more aware of my weaknesses, but also learned that God doesn’t merely tolerate those — he uses them to make us more understanding ministers, and disciples who are aware of their utter dependence on the Lord’s grace.

In high school I didn’t even recognize a lot of my imperfections. In the beginning of seminary, they seemed insurmountable. But now I see how God is able to use those and that with grace, we can have lots of hope!

If you wish to contact Quinn Thomas, please e-mail Maria Izquierdo-Roque in the Vocations Office or call her at (501) 664-0340. This article was published July 1, 2020. Copyright Diocese of Little Rock. All rights reserved. This article may be copied or redistributed with acknowledgement and permission of the publisher.