Showering those we love with cards, candy and roses are popular ways to celebrate St. Valentine's Day in the United States. This tradition seems to come from a belief in England and France during the Middle Ages that birds begin to pair on Feb. 14, which just happens to be the feast day of St. Valentine, according to the Catholic Education Resource Center. 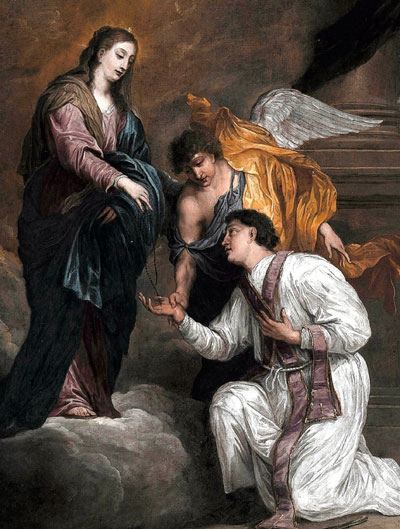 St. Valentine receives a rosary from the hands of the Virgin Mary in this 1677 painting by artist David Teniers III.

The connection of romantic love to the Catholic saint can be traced back to Geoffrey Chaucer's Old English poem: "Parliament of Foules." In it he wrote, “For this was sent on Seynt Valentyne’s day, / Whan every foul cometh ther to choose his mate." Other associations between the two followed and by the 14th century courtly love among nobility began to be celebrated on Feb. 14, according to Simply Catholic.

There were actually three men named St. Valentine in the Early Church who were martyrs and shared the same feast day. The first St. Valentine was a priest and physician in Rome who was beheaded for the faith in 270 A.D. The second was the bishop of Interamna (now Terni, located about 60 miles from Rome) who was also beheaded around the same time by Emperor Claudius II. The third suffered martyred in Africa with a number of companions, but nothing further is known about him.

"While it seems that the exchange of 'valentines' is more the result of secular custom rather than the memory of St. Valentine, and that the celebration has been further paganized with cupids and the like, there is a Christian message that should be remembered," explained Father William Saunders in his "History of Saint Valentine," originally published in Arlington Catholic Herald.

"The love of our Lord, depicted beautifully in the image of his most Sacred Heart, is a sacrificial, selfless and unconditional love. Such is the love that each Christian is called to express in his own life, for God and neighbor. Clearly, St. Valentine, no matter which one, showed such a love, bearing witness to the faith in his dedication as a priest and in the offering of his own life in martyrdom," he added.

"Never forget Jesus said: 'This is my commandment: love one another as I have loved you. There is no greater love than this: to lay down one's life for one's friends.' (John 15:12-13). St. Valentine fulfilled this command, and may we do the same."