His invitation issued on Sept. 29, the feast of the archangels, explained that doing this would join us "in communion and in penitence, as the people of God, in asking the holy Mother of God and St. Michael, the archangel to protect the Church from the devil, who always seeks to separate us from God and from each other." (Read How to Pray the Rosary and watch video below.) 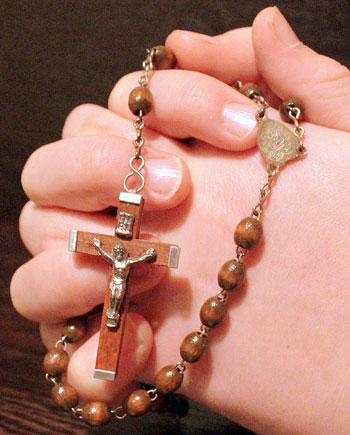 The Holy Father met earlier in September with Jesuit Father Federic Fornos, international director of the pope's Worldwide Prayer Network, formerly known as the Apostleship of Prayer, to ask that the recitation of the rosary in October conclude with "the ancient invocation 'Sub Tuum Praesidium' ('Under your protection') and with the prayer to St. Michael the Archangel, who protects us in the battle against evil." Read Catholic News Service to learn more or see the #PrayForTheChurch campaign.

Pope Francis explained in his Sept. 11 homily that prayer is the only thing that can defeat the "Great Accuser" who “goes around the world seeking to accuse." Vatican News explained that "Russian mystics and the great saints of all the traditions advised, in moments of spiritual turbulence, to shelter beneath the mantle of the holy Mother of God pronouncing the invocation: 'Sub Tuum Praesidium.'"

This pray has a variety of translations. Here are two options:

1. We fly to thy protection, O holy Mother of God. Do not despise our petitions in our necessities, but deliver us always from all dangers, O glorious and Blessed Virgin.

2. We turn to you for protection, Holy Mother of God. Listen to our prayers and help us in our needs. Save us from every danger, glorious and blessed Virgin.

St. Michael the Archangel, defend us in battle, be our protection against the wickedness and snares of the devil. May God rebuke him we humbly pray; and do thou, O Prince of the Heavenly host, by the power of God, cast into hell Satan and all evil spirits who wander through the world seeking the ruin of souls. Amen.