Catholic parishes and schools across the Diocese of Little Rock hosting special Mardi Gras events. Visit our Calendar of Events to learn more or contact a parish or school near you to find out if a celebration is planned in your area.

According to Franciscan Media, Mardi Gras came to the New World in 1699 when a French explorer arrived at the Mississippi River, about 60 miles south of present day New Orleans, and named the spot "Point du Mardi Gras" because he knew the holiday was being celebrated in France on that day. Eventually the French in New Orleans celebrated with masked balls and parties, which was banned by the Spanish in the mid-1700s, but resumed by 1827. "Fat Tuesday" comes from the tradition of slaughtering and feasting on a fattened calf on the last day of carnival. The day is also known as "Shrove Tuesday" (from "to shrive" or hear confessions). The custom of making pancakes on this day comes from the need to use up fat, eggs and dairy products before fasting and abstinence begins. 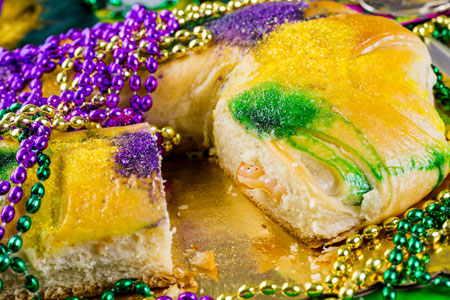 Unlike the tradition in the United States, in many predominately Catholic countries, the celebration is not limited to one day. Catholic Culture explains that the time between the Epiphany and Lent is known as "carnival." Carnival comes from the Latin words, "carne vale," which means "meat farewell." During Lent we abstain from meat on Ash Wednesday and Fridays.

Since carnival begins on the Epiphany, a king cake is traditionally served. The Epiphany celebrates the Magi (three kings) bringing gifts the newborn king (Jesus). This custom began in France in the 12th century. It was adapted in the United States and has become a hallmark of Mardi Gras.

Franciscan Media recalls a legend that held that king cakes were "made in a circle to represent the circular routes that the Wise Men took to find Jesus, in order to confuse King Herod and foil his plans of killing the Christ Child. In the early days, a coin or bean was hidden inside the cake, and whoever found the item was said to have good luck in the coming year. In Louisiana, bakers now put a small baby, representing the Christ Child, in the cake; the recipient is then expected to host the next king cake party."

Msgr. Owen Campion had a different take in Our Sunday Visitor. "By old, old custom, the cake cannot be a loaf. It must be baked as a round circle, 360 degrees, no breaks, no deviations in shape. It all signifies the eternity and perfection of God. Icing must cover the cake, in the bright colors of purple, green and gold, as if the frosting is a royal mantle. It is. Inside the cake is placed a small figurine or image of a baby, Jesus, the king." The connection to the Epiphany does not end there. The colors of Mardi Gras are purple, green and gold. Msgr. Campion explained that the purple stands for myrrh, green is for frankincense and gold is for gold — the gifts the Wise Men gave Jesus; gifts for a king.

Lots of Catholic websites offer recipes and ideas to help you celebrate Mardi Gras with your family. Here are a few to review. Teaching Catholic Kids offers several Ideas for celebrating Mardi Gras as a family, which includes masks, costumes and a king cake. Catholic Icing provides a recipe for Shrove Tuesday Pancakes while Catholic Cuisine has one for Mardi Gras Beignets and Catholicism.com suggests Paczki Day pastries.