To learn more, read Bishop Anthony B. Taylor's 2016 Faithful Citizenship homily or the Catholic voter Q&A. In the Q&A, Father Taryn Whittington addresses frequently asked questions from a Catholic perspective. Click on a button to access these articles.

As we approach election day on Nov. 8, Catholics in the United States are called to educate themselves on the candidates and issues, pray and then vote their conscience. Catholic tradition holds that "responsible citizenship is a virtue, and participation in political life is a moral obligation." To guide us in this process, the U.S. Conference of Catholic Bishops updated its: "Forming Consciences for Faithful Citizenship: A Call to Political Responsibility" in 2015. Download it in English or Spanish.

Accompanying this document are study guides, videos, prayer suggestions and other resources to help guide voters. A brief summary of the document can be found in two bulletin inserts, which explain the core principles that form a Catholic's participation in the political process and how these principles should be applied to the act of voting and taking positions on issues.

In Part 1: "The Challenge of Forming Consciences for Faithful Citizenship: Our Call as Catholic Citizens," the four principles of Catholic social teaching are outlined. These are: the dignity of the human person, the common good, subsidiarity and solidarity. These highlight human rights and responsibilities, respect for work and rights of workers, care for God's creation and the preferential option for the poor and vulnerable. 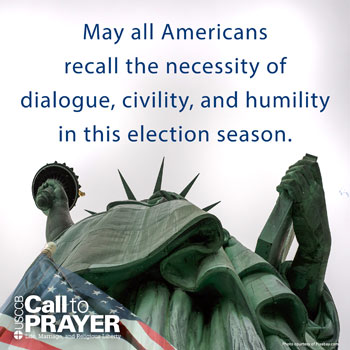 Together these four principles provide a moral framework for promoting a consistent life ethic. "Rightly understood, this ethic does not treat all issues as morally equivalent; nor does it reduce Catholic teaching to one or two issues. It anchors the Catholic commitment to defend human life and other human rights, from conception until natural death, in the fundamental obligation to respect the dignity of every human being as a child of God."

Voters should also use Catholic teaching to "examine candidates’ positions on issues and consider candidates’ integrity, philosophy and performance." They should be guided more by moral conviction than by "attachment to any political party or interest group. In today’s environment, Catholics may feel politically disenfranchised, sensing that no party and few candidates fully share our comprehensive commitment to human life and dignity. This should not discourage us. On the contrary, it makes our obligation to act all the more urgent."

In Part 2: "The Challenge of Forming Consciences for Faithful Citizenship: Making Moral Choices and Applying Our Principles," Catholics are urged to develop a well-formed conscience and understand the role of prudence before taking a position on an issue or voting.

"We Catholics have a lifelong obligation to form our consciences in accord with human reason, enlightened by the teaching of Christ as it comes to us through the Church." It is also important to develop the virtue of prudence which teaches us to "discern our true good in every circumstance and to choose the right means of achieving it.” (Catechism of the Catholic Church, no. 1806)

"In today’s environment, Catholics may feel politically disenfranchised, sensing that no party and few candidates fully share our comprehensive commitment to human life and dignity. This should not discourage us. On the contrary, it makes our obligation to act all the more urgent."

In addition, this summary briefly details intrinsically evil acts that must always be rejected and never supported and provides a list of public policies that should concern Catholics the most.

"Forming Consciences for Faithful Citizenship: A Call to Political Responsibility" acknowledges that Catholics face difficult choices when choosing how to vote. This is why it is so important to have a well-formed conscience that discerns the "proper relationship among moral goods."

"A Catholic cannot vote for a candidate who favors a policy promoting an intrinsically evil act, such as abortion, euthanasia, assisted suicide, deliberately subjecting workers or the poor to subhuman living conditions, redefining marriage in ways that violate its essential meaning, or racist behavior, if the voter's intent is to support that position. In such cases, a Catholic would be guilty of formal cooperation in grave evil. At the same time, a voter should not use a candidate's opposition to an intrinsic evil to justify indifference or inattentiveness to other important moral issues involving human life and dignity. (no. 34)

"There may be times when a Catholic who rejects a candidate's unacceptable position even on policies promoting an intrinsically evil act may reasonably decide to vote for that candidate for other morally grave reasons. Voting in this way would be permissible only for truly grave moral reasons, not to advance narrow interests or partisan preferences or to ignore a fundamental moral evil." (no. 35)