Eucharist is not a symbol: It really is Jesus

"Could not Christ's word, which can make from nothing what did not exist, change existing things into what they were not before? It is no less a feat to give things their original nature than to change their nature." — St. Ambrose

Bishop Anthony B. Taylor will begin the Diocese of Little Rock's observance of the National Eucharistic Revival with a recorded video/audio homily to be played at all Masses June 18-19 on the Solemnity of the Most Holy Body and Blood of Christ. He plans to release a series of videos for the revival in the coming year. Click on the button above to find resources to celebrate the three-year revival, which begins in Arkansas on Saturday, June 18. The bishop will celebrate an opening Mass at the Cathedral of St. Andrew in Little Rock at 4:30 p.m. and Father John Connell, VG, will celebrate an opening Mass at St. Vincent de Paul Church in Rogers at 5 p.m. The diocesan phase of the revival will conclude with Masses in northwest and central Arkansas in June 2023. Details to come. The national observance reaches its climax at the National Eucharistic Congress in July 2024, and concludes on Pentecost Sunday in 2025, after a year of "going out on mission."

Historically known by its Latin name, Corpus Christi, this feast day highlights the Real Presence of Jesus in the Eucharist, — Body, Blood, Soul and Divinity. The word "Eucharist" means "thanksgiving." It comes from the Greek "eucharistein" and "eulogein," which "recalls the Jewish blessings that proclaim — especially during a meal — God's works: creation, redemption and sanctification." (Catechism of the Catholic Church, no. 1328) | Eucharist Resources

On the night before he died, Jesus shared one last meal with his Apostles. During this Last Supper, "he took the bread, said the blessing, broke it, and gave it to them, saying, 'This is my body, which will be given for you; do this in memory of me.' And likewise the cup after they had eaten, saying, 'This cup is the new covenant in my blood, which will be shed for you.'" (Luke 22:19-20)

Through the Apostles' successors, the Catholic Church has been following Jesus' command to "do this in memory of me" for more than 2,000 years. "In order to leave them a pledge of (his) love, in order never to depart from his own and to make them sharers in his Passover, (Jesus) instituted the Eucharist as the memorial of his death and resurrection, and commanded his Apostles to celebrate it until his return; 'thereby he constituted them priests of the New Testament.'" (Catechism of the Catholic Church, no. 1337)

Taking him at his word when he said, "This is my body," and "This is my blood," the Church teaches that the bread and wine become the Body and Blood of Jesus at every Mass. Though Christ is present in many ways in his Church, his presence in the Eucharist is unique. He "makes himself wholly and entirely present" in the bread and wine. Therefore, the Eucharist is the "source and summit of the Christian life." (no. 1324) 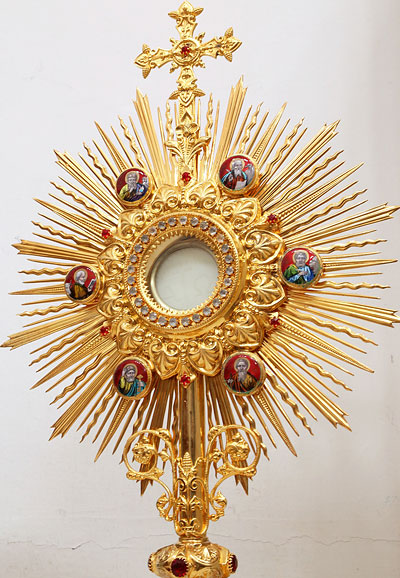 "The Church and the world have a great need for eucharistic worship. Jesus awaits us in this sacrament of love. Let us not refuse the time to go to meet him in adoration, in contemplation full of faith, and open to making amends for the serious offenses and crimes of the world. Let our adoration never cease." — St. John Paul II, "Dominicae Cenae," no. 3

Because of its importance, the Church has a special feast day to recognize the presence of Jesus in the Eucharist. The Solemnity of the Most Holy Body and Blood of Christ, traditionally called "Corpus Christi," (Latin for "Body of Christ,") traces its origins back to Pope Urban IV who declared the universal celebration of this feast day in 1264.

He asked papal theologian St. Thomas Aquinas to compose new liturgical texts for the feast. His "'Adoro te Devote,' remains an essential part of the Church’s sacred hymnography. The 'Pange Lingua,' for example, is often sung during the eucharistic procession after the evening Mass of the Lord’s Supper on Holy Thursday, to which the last two stanzas are referred separately as 'Tantum Ergo' and sung at benediction of the Blessed Sacrament." To learn more, read Simply Catholic.

Traditionally, Catholics celebrate this great feast with a eucharistic procession, holy hour, eucharistic adoration with benediction of the Blessed Sacrament or a Litany of the Most Precious Blood. However, this year we also have the opportunity to celebrate by taking part in the National Eucharistic Revival, which begins Saturday, June 18 in the Diocese of Little Rock through two opening Masses in Little Rock and Rogers.

Bishop Taylor will celebrate one of the Masses at the Cathedral of St. Andrew in Little Rock at 4:30 p.m. and the second will be celebrated by Father John Connell, VG, at St. Vincent de Paul Church in Rogers at 5 p.m. The three-year revival was organized by the U.S. bishops to increase devotion to and belief in the real presence of Jesus in the Eucharist. | Eucharistic Revival Resources

The bishop explained the need for the revival in a talk he gave in February. "One of the chief pastoral problems today is the fact that, according to the 2019 Pew Research Survey, only 31 percent of Catholics believe in the real presence of Jesus in the Eucharist." | Read His Talk

To address this problem, the U.S. bishops organized the revival, and published the document, "The Mystery of the Eucharist in the Life of the Church," which summarizes the Church's teaching on the Eucharist and "is intended to be a point of departure to reignite catechesis and evangelization in anticipation of the eucharistic revival," said Bishop Taylor.