Donate to help in recovery after flooding

Patrick Gallaher, director of Catholic Charities of Arkansas, released the following update regarding CCA's response to damage caused by the historic flooding along the Arkansas River on Wednesday, June 12, 2019. For more information, e-mail Gallaher, call him at (501) 664-0340, or read Arkansas Catholic.

"During the week of May 21, a ridge of high pressure built over the southeastern United States. In that week, 6 to 12 inches of rain fell in parts of the plains and Midwest, impacting northeast Oklahoma requiring dam releases from already high lakes. This resulted in widespread flooding, and produced record-breaking crests downstream along the Arkansas River. A river flood of this magnitude has never happened before. 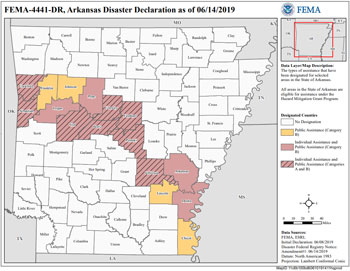 "Although the flooding in Arkansas was well anticipated, allowing people to flee to safety, tens of thousands of acres of farm and ranch land were flooded. Additionally, more than 1,000 homes of families living near the river were damaged by water to varying degrees.

"Recovery efforts are getting underway and will be supplemented by individual assistance payments from the FEMA (Federal Emergency Management Agency) within the declared disaster areas. These payments will not be adequate to return the survivors to a semblance of normalcy. Catholic Charities of Arkansas is working with the affected parishes and through the Arkansas VOAD (Volunteer Organizations Active in Disaster) to bring relief to families that have sustained losses.