Candlemas symbolizes the light of Christ

The Church celebrates the feast of the Presentation of the Lord 40 days after the birth of Jesus. Before 1969, the feast was known as the Purification of the Blessed Virgin Mary, or Candlemas. It was celebrated in the earliest times in the Church in Jerusalem and from there the observance spread throughout the Christian world.

According to the law of Moses, a woman was ritually unclean for 40 days after childbirth. Therefore, Mary and Joseph took Jesus to the Temple to present him to the Lord and offer sacrifice for purification. "... just as it is written in the law of the Lord, 'Every male that opens the womb shall be consecrated to the Lord,' and to offer the sacrifice of 'a pair of turtledoves or two young pigeons...'" (Luke 2:23-24)

Before the Second Vatican Council, these feasts, celebrated on Feb. 2, ended the Christmas season. Now, the season ends on the feast of the Baptism of the Lord in early January. 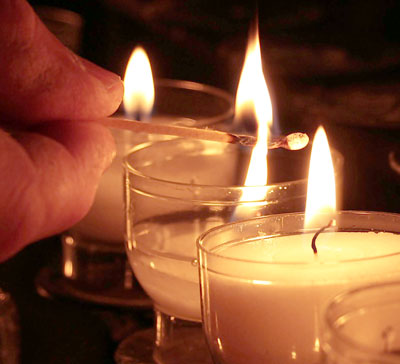 Since a procession and blessing of candles has been traditionally included with the "Candle Mass," it became known as "Candlemas Day." The candles serve as a symbol of Jesus being "a light for revelation to the Gentiles, and glory for your people Israel," as foretold by Simeon. (Luke 2:32)

"February 2 was chosen for this feast because the holy family’s presentation of the baby Jesus in the Temple would have occurred 40 days after the birth of Jesus, the day that divine light began to shine in the darkness of a very dark world — hence the blessing of candles," explained Bishop Anthony B. Taylor in his 2019 CASA homily.

The blessing of candles is similar to the blessing of ashes on Ash Wednesday and palms on Palm Sunday. Parishioners can bring candles to this Mass to have them blessed for use at home throughout the year. The Catholic Company explains that candles are symbolic of the incarnate Christ. "The beeswax is a symbol of his pure body, the wick his soul and the flame his divinity."

This feast celebrates the "coming of light into the world," but "a shadow also passes; a shadow foretelling the suffering that will precede the victory of the Light over darkness," wrote Ellyn von Huben with Word on Fire. "Simeon not only proclaimed that he had seen his salvation, but also told the Mother of our Lord that her share would include a sorrow pierced heart.

In "Redemptoris Mater," St. John Paul II wrote that Mary heard in Simeon’s words something akin to a second annunciation, 'for they tell her of the actual historical situation in which the Son is to accomplish his mission, namely, in misunderstanding and sorrow. While this announcement on the one hand confirms her faith in the accomplishment of the divine promises of salvation, on the other hand it also reveals to her that she will have to live her obedience of faith in suffering, at the side of the suffering Savior, and that her motherhood will be mysterious and sorrowful.”