Bishop Anthony B. Taylor issued the following statement Wednesday, July 1 in response to the U.S. Supreme Court decision in the case of Obergefell v. Hodges requiring all states to license and recognize same-sex unions as a marriage. To learn more, see Bishop Q&A.

"To the people of the Diocese of Little Rock: Last week the U.S. Supreme Court issued a ruling that now requires all states to grant same-sex unions the same legal status as true marriages. This decision runs counter to the truth of marriage, which by its very nature is about love and commitment shared between consenting adults but also about much more; it is also for the purpose of bringing forth new life and raising the children born of that union. 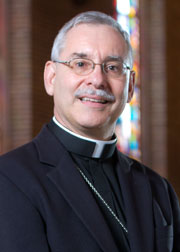 "This is no less true for those married couples who are unable to conceive children of their own, but who nonetheless reflect the mutual complementarity of the sexes — a complementarity that is ingrained in our biology and images our Creator.

"Jesus taught unambiguously that from the beginning marriage is the lifelong union of one man and one woman, and as Catholics our faith invites us to embrace this truth inscribed in our very bodies as male and female — a truth regarding the human person that remains unchanged and is indeed unchangeable.

"You might ask: why does the Church care about changes in civil marriage so long as we are not forced to officiate at such ceremonies ourselves? The answer is that we have a responsibility to the common good, and error has tragic practical consequences that affect all of us — and in particular our children, the most vulnerable among us.

"We have already seen the damage suffered by children and society in general as the consequence of the breakdown of the family due to widespread divorce and single parenthood, often due to regrettable though unavoidable circumstances. However, in the case of same-sex marriage we have a completely avoidable circumstance.

"All children have a basic right to be raised, when possible, by their natural parents in a stable, loving home. Marriage between a man and a woman is the only institution that by its nature is able to accomplish this, even if other children have been raised well in other situations, thanks often to heroic sacrifices on the part of single parents. ..." Read the entire statement here >