The following article was originally published in Catholic Charities Connections, a special section of Arkansas Catholic, on Nov. 24, 2018.

Each year, the Diocese of Little Rock takes up a second collection for the Catholic Campaign for Human Development (CCHD) during the weekend before Thanksgiving.

Twenty-five percent of this collection remains in the diocese and is used by Catholic Charities of Arkansas to fund the CCHD Local Grant Program. Typically, the total amount available for local grants ranges from $15,000 to $20,000. Local groups may apply for grants starting on Jan. 1 of each year. The cut-off date for grant submissions is May 31. 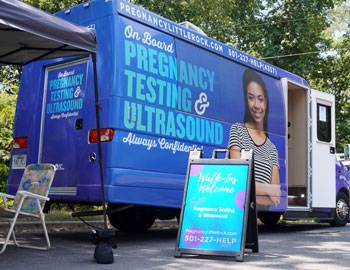 A local grant funded by the CCHD collection is helping Arkansas
Pregnancy Resource Center in Little Rock with costs of their mobile
sonogram program, especially needed after a fire destroyed their main
facility.

Grant applications are considered during June and grant checks are sent to successful applicants in early July. Individual grants range from $200 to $2,000. The projects for which applications may be submitted are broadly considered, but all constitute a local effort to help serve the poor or marginalized in some manner.

This past year more than $15,000 was distributed to 25 organizations throughout the state. Most of the grants were aimed at serving a wide population, while a few were focused on very discrete issues. The following organizations were awarded grants in 2018: