Take a fast from food, social media, even hot showers: Unique fasts can help us draw closer to the will of God during the season of Lent

Fasting and Abstinence: More than Laws of the Church

Joy Along the Journey: Religious Orders Take on Many Penances During Lent, but They Try to Do it With a Happy Heart

Pastoral Statement on Penance and Abstinence

The Rules of Fasting

Fasting: The Goal is a Transformed Heart

"In embracing the experience of poverty, those who fast make themselves poor with the poor and accumulate the treasure of a love both received and shared. In this way, fasting helps us to love God and our neighbor, inasmuch as love, as St. Thomas Aquinas teaches, is a movement outwards that focuses our attention on others and considers them as one with ourselves." — Pope Francis, 2021 Message for Lent

According to the Catechism of the Catholic Church, Lent reflects the 40 days Jesus spent in the desert fasting and praying before his public ministry began. While Moses (Exodus 34:28) fasted to prepare for God's revelation, Jesus took it a step further by doing the practice out of love. "Jesus' mission to announce and bring the kingdom of God begins with a complete and total self-gift to the Father, in love, through fasting," according to Our Sunday Visitor's Catholic Encyclopedia. 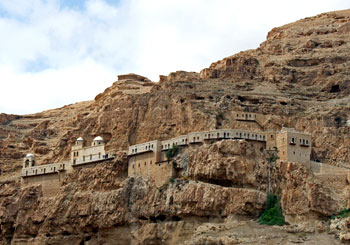 The Monastery of the Temptation (above) was built on the Mount of
Temptation, which is the hill in the Judaean Desert that tradition holds is
the place where Jesus was tempted by the devil (Matthew 4:8) when he
fasted for 40 days in the desert.

For Christians, "fasting is not only a bodily expression of our need for God; the practice itself is a pathway which can lead us to the reality of God's kingdom." | Fasting and Abstinence Guidelines

Cackie Upchurch, former director of Little Rock Scripture Study, said fasting is an ancient custom that can be found in almost all religious traditions. In the time of the Old Testament, the Jewish people regularly fasted from food and drink, but they did so for different reasons. "It was not about a devotional practice. It was really about petitioning, or praying for repentance, or sorrow."

Tearing one's garment and putting on sackcloth and ashes while fasting was common. King David did this to repent and petition for the life of his son. But when the baby died, he stopped (2 Samuel 12:16-23). According the Law of the Israelites, which is spelled out in the books of Leviticus and Numbers, the only place fasting was an act of worship was on the Day of Atonement, which continues today, Upchurch said.

In the New Testament, fasting is rarely mentioned, but when it is, it's usually about how not to do it. But that does not mean it wasn't practiced. During Jesus' Sermon on the Mount he said when fasting "do not look gloomy like the hypocrites. They neglect their appearance, so that they may appear to others to be fasting. ... But when you fast, anoint your head and wash your face, so that you may not appear to be fasting, except to your Father who is hidden" (Matthew 6:16-18).

So the presumption is "that of course you're going to be fasting." The important thing is "you do it from the heart," Upchurch said. "Jesus doesn't want a typically religious practice just to be taken for granted. He wanted them to understand the purpose of it. He really is critical of the fasting practices that had become just generally rote."

She called his teaching a "kind of evolution in Scripture." Jesus confirmed what the prophets Micah, Hosea and Isaiah said while speaking for God in saying the kind of fasting he desired. "'The sacrifice I desire from you is that you rend your hearts and that you serve the poor and walk humbly with God,'" Upchurch said, summing up the prophets' instruction. If the external act of fasting does not reflect "something internal in us" then it is not what God wants. In the Catholic faith, people fast out of repentance or petition, but ultimately, the goal is to "draws us closer in a more regular way to the heart of God."

This excerpt came from "Fasting out of love: God doesn't want a fulfilled obligation, he wants our hearts," Arkansas Catholic, Feb. 21, 2009. Reprinted with permission. Copyright Diocese of Little Rock. All rights reserved. This article may be copied or redistributed with acknowledgement and permission of the publisher.

According to Father Daniel Merz, associate director of the U.S. bishops' Secretariat of Divine Worship, Christian tradition can name at least seven reasons to fast. These are listed below.

Take a fast from food, social media, even hot showers: Unique fasts can help us draw closer to the will of God during the season of Lent

Fasting and Abstinence: More than Laws of the Church

Joy Along the Journey: Religious Orders Take on Many Penances During Lent, but They Try to Do it With a Happy Heart

Pastoral Statement on Penance and Abstinence

The Rules of Fasting