Solemnity of the Assumption of the Blessed Virgin Mary

The Solemnity of the Assumption of the Blessed Virgin Mary is celebrated on Aug. 15. It is normally a separate holy day of obligation, but this year, the solemnity replaces the Mass of the day because it occurs on a Sunday in Ordinary Time. This feast recognizes that Jesus' mother was "taken up body and soul into heavenly glory" when her "earthly life was finished." (Catechism of the Catholic Church, no. 966).

According to St. John Paul II, the first evidence of belief in the assumption of Mary can be found in "Transitus Mariae," Latin for "The Crossing Over of Mary," an apocryphal account that dates back to the second and third centuries. By the 14th century, belief in the assumption was widespread, and when Pope Pius XII declared it a dogma of faith in 1950, "it was a truth almost universally accepted and professed by the Christian community in every corner of the world."

"The definition of the dogma, in conformity with the universal faith of the people of God, definitively excludes every doubt and calls for the express assent of all Christians," St. John Paul II said during his general audience at the Vatican on July 2, 1997. The National Catholic Register also offers references to this teaching in both the Old and New Testaments. And Ascension Press explains "How Mary’s Assumption is Rooted in Tradition & Scripture."

The assumption of Mary may have been widely accepted in 1950, but in today's world, it is highly suspect. Pope Benedict XVI acknowledged why many find belief in the assumption irrelevant to their lives. "Some people today live as if they never had to die or as if, with death, everything were over; others, who hold that man is the one and only author of his own destiny, behave as though God did not exist, and at times they even reach the point of denying that there is room for him in our world." 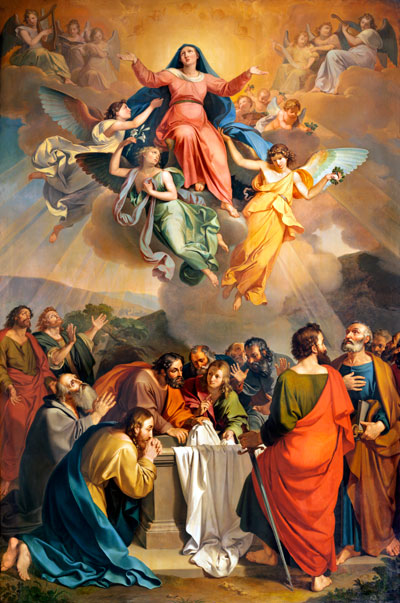 So, why does the assumption of Mary matter? "By contemplating Mary in heavenly glory, we understand that the earth is not the definitive homeland for us either, and that if we live with our gaze fixed on eternal goods we will one day share in this same glory and the earth will become more beautiful," Pope Benedict explained in his general audience on Aug. 16, 2006. "Consequently, we must not lose our serenity and peace even amid the thousands of daily difficulties. The luminous sign of Our Lady taken up into heaven shines out even more brightly when sad shadows of suffering and violence seem to loom on the horizon."

In his apostolic constitution, "Munificentissimus Deus," Pope Pius XII explains the effects of original sin, and how Mary, who was preserved from original sin and remained sinless throughout her life, experienced immediately the hope of all faithful followers of Jesus. "Christ overcame sin and death by his own death, and one who through baptism has been born again in a supernatural way has conquered sin and death through the same Christ. Yet, according to the general rule, God does not will to grant to the just the full effect of the victory over death until the end of time has come. And so it is that the bodies of even the just are corrupted after death, and only on the last day will they be joined, each to its own glorious soul.

"This solemnity celebrates the fact that Mary’s assumption is 'a pledge of the future participation of the members of the mystical Body of Christ in the paschal glory of the Risen Christ.' It shows that the Lord 'reserves a munificent reward for his humble servant because of her faithful cooperation with the divine plan, which is a destiny of fullness, happiness, glorification of her immaculate soul, her virginal body, perfect configuration to her Risen Son.'" (Directory, no. 180)

For Your Marriage, an initiative of the U.S. Conference of Catholic Bishops, summed up the joy Mary's assumption holds for us. "Her entry into heaven prefigures our own hope of experiencing the same eternal life." This event reveals not only the love God has for his children, but also the realization of what he intended before death entered the world. Mary was able to "experience the immediate perfect union with her Son in heaven, never knowing, tasting or suffering from bodily corruption or decay (due to death) in any way," explains Mark Hart, of Life Teen International.

"How marvelous is it to know that this is precisely what awaits us," proclaims Nicholas LaBanca for Ascension Press. "When we reflect on this reality, we should be filled with joy. This is why in many classical church buildings, particularly in the Eastern churches, you may notice that the Assumption is depicted at the building’s exit, on the western wall. This is so that we are constantly reminded to think of our earthly life’s end in light of Mary’s assumption, offering ourselves to be enveloped in our Lord’s loving embrace."