Even though this feast is normally a separate holy day of obligation to attend Mass, it falls on a Sunday this year, which is already a holy day of obligation. The Catechism of the Catholic Church explains the basis for this title for Mary. "Called in the Gospels 'the mother of Jesus,' Mary is acclaimed by Elizabeth, at the prompting of the Spirit and even before the birth of her Son, as 'the mother of my Lord.' 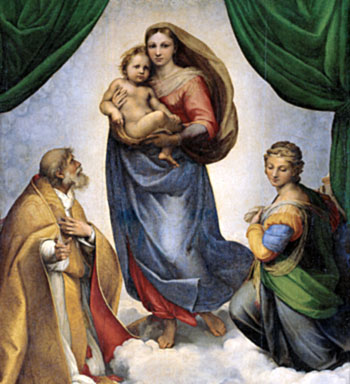 In fact, the One whom she conceived as man by the Holy Spirit, who truly became her Son according to the flesh, was none other than the Father's eternal Son, the second person of the Holy Trinity. Hence the Church confesses that Mary is truly 'Mother of God' (Theotokos)." (No. 495) "Theotokos," comes from the Greek meaning, "God-bearer." This title was approved at the Council of Ephesus in 431 A.D. when the Church fathers formalized the teaching that the one born of Mary was indeed the Son of God. This was done to combat false teachings about Jesus at the time.

In the Dogmatic Constitution on the Church, "Lumen Gentium,"the title, "Mother of God" appears 13 times in Chapter VIII, which explains that, "The Virgin Mary, who at the message of the angel received the Word of God in her heart and in her body and gave life to the world, is acknowledged and honored as being truly the Mother of God and Mother of the Redeemer. Redeemed by reason of the merits of her Son and united to him by a close and indissoluble tie, she is endowed with the high office and dignity of being the Mother of the Son of God, by which account she is also the beloved daughter of the Father and the temple of the Holy Spirit. ...

"At the same time, however, because she belongs to the offspring of Adam she is one with all those who are to be saved. ... Wherefore she is hailed as a pre-eminent and singular member of the Church, and as its type and excellent exemplar in faith and charity. The Catholic Church, taught by the Holy Spirit, honors her with filial affection and piety as a most beloved mother." (Second Vatican Council, 1964)

In his 2016 homily on the Solemnity of Mary, Bishop Anthony B. Taylor reflects on Mary as a model for all of us.

"Prior to Jesus, people understood the Old Covenant as basically the result of a transfer of ownership from the false god Pharaoh to the one true God. They had been slaves of Pharaoh and had to do what he said, like it or not. Now they belong to God and have to do what he says. The Hebrew word for believer literally means "slave."

"We see Mary refer to herself in this way in the Magnificat: "My soul proclaims the greatness of the Lord, my spirit rejoices in God my Savior, for he has looked with favor on his lowly servant" — our English renders the word as "servant" but the text actually says "his lowly slave"...

"So it is remarkable that St. Paul says that this has all changed with Jesus and the New Covenant: 'When the fullness of time had come, God sent his Son, born of a woman, born under the law, so that we might receive adoption as sons ... so you are no longer a slave but a son, and if a son then also an heir, through God.'

"So now we do God's will, not under the constraint of the Old Covenant because we are slaves, obligated to do what our master says, or else, we do so freely in the New Covenant of grace. Our obedience is now rooted in listening to God with an open heart, embracing in our own lives the cross of sacrificial love, confident that we will also share in his victory over sin and death.

"And isn't that precisely what Mary did, whose motherhood we celebrate today. She listened to God with an open heart when Gabriel came to invite her to risk everything in order to do God's will and bring our Savior into the world and then all the other events of Jesus' nativity and childhood. Our text says 'Mary kept all these things, reflecting on them in her heart.' It is for that reason that she is not only the mother of the Church, she is also the model for all believers."

To learn more about the Church's teachings on Mary, see the catechism or the Q&A or Marian glossary from the U.S. Conference of Catholic Bishops.