Epiphany of the Lord

According to the Catechism of the Catholic Church, the epiphany "is the manifestation of Jesus as Messiah of Israel, Son of God and Savior of the world. The great feast of the Epiphany celebrates the adoration of Jesus by the wise men (magi) from the East, together with his baptism in the Jordan and the wedding feast at Cana in Galilee. In the magi, representatives of the neighboring pagan religions, the Gospel sees the first-fruits of the nations, who welcome the Good News of salvation through the Incarnation. 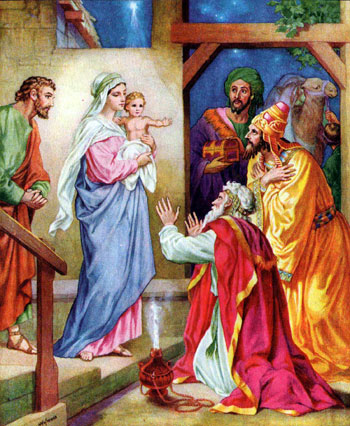 "The magi's coming to Jerusalem in order to pay homage to the king of the Jews shows that they seek in Israel, in the messianic light of the star of David, the one who will be king of the nations. Their coming means that pagans can discover Jesus and worship him as Son of God and Savior of the world only by turning towards the Jews and receiving from them the messianic promise as contained in the Old Testament. The epiphany shows that 'the full number of the nations' now takes its 'place in the family of the patriarchs.' and acquires 'Israelitica dignitas' (is made 'worthy of the heritage of Israel')." (no. 528)

In his 2017 homily in the feast of the Epiphany, Bishop Anthony B. Taylor explains the background of the magi and the significance of the gifts they brought Jesus. "These Magi were astrologers. Their job was to decipher what the stars had to say about current and future events. One day there appeared a star whose movements didn't fit into their tables and graphs. This star behaved so strangely that it just had to be announcing something really big and so they began to follow it wherever it led. As they followed their star westward toward Jerusalem, they soon realized that this amazing star had to be announcing that the Jews' long awaited Messiah had finally been born. It had to be him, there was no other explanation.

"The word 'epiphany' means 'manifestation' and today through the Magi, the identity of the Messiah and his fate are revealed for the very first time, but how did they know to bring along gifts of gold, frankincense and myrrh? These were certainly not typical gifts for babies. The gold and frankincense reveal the identity of the Messiah and fulfill what Isaiah prophesied in today's first reading: 'Dromedaries from Midian and Ephah, all from Sheba shall come bearing gold and frankincense and proclaiming the praises of the Lord.' ... What does the gold and frankincense say about Jesus' identity? That he is king and God. Gold for the Messiah, King of the Jews and King of the Universe. And incense with which to worship this Messiah as God, the Second Person of the Blessed Trinity.

"And what does the myrrh say about Jesus' fate? That he will die: Myrrh was used to anoint bodies for burial. That though immortal and eternal as God, this Messiah will embrace death in order to save us. And that unlike any other king, this Messiah's throne will be a cross and his crown will be made of thorns. He will be dressed in royal purple and proclaimed king only by his torturers, who in mockery hung above his head the words: 'Jesus of Nazareth, King of the Jews, INRI.' Torturers whom he forgave, for whom also he died, for whom also he came to save. So gold for a king, incense for God and myrrh because he will die to save us."