Bishop Anthony B. Taylor will celebrate the 34th annual Dr. Martin Luther King Jr. Memorial Mass at 4:30 p.m. on Saturday, Jan. 11 at the Cathedral of St. Andrew in Little Rock. He will present the Daniel Rudd Award to a black Catholic who is active in his or her parish and community during the Mass. All are invited to attend. This Mass is sponsored by the Diocesan Council for Black Catholics. For more information, contact Rosalyn Pruitt at (501) 375-9617. 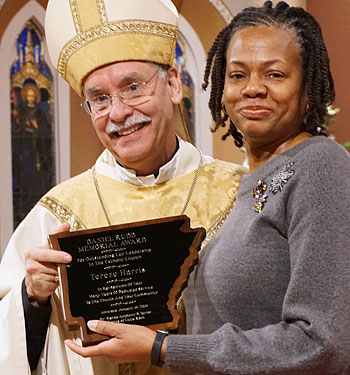 In 2019, the bishop presented the award to Tereze Harris, a member of St. Mary Church in McGehee. Harris, 84, was not able to attend but her niece Deena Robinson accepted the award in her name. Born Frankye Harris, she was raised Baptist and converted to Catholicism and later joined St. Scholastica Monastery in Fort Smith. She was the only black member in the convent at that time. She worked as a teacher at St. Boniface School in Fort Smith as well as in the Delta.

She left the religious order in 1984, but remained active in her faith. She launched the Tereze Harris Scholarship Foundation in 1985, followed in 1998 by the Andrew Gregory Memorial Scholarship Foundation. The two foundations have awarded more than 160 scholarships to graduating seniors in Desha and Chicot counties who demonstrate excellence in math. To learn more about Harris, read this profile in Arkansas Catholic.

Daniel Rudd was a former slave who lived in Marion, Arkansas, and started the first National Black Catholic Congress. He published the first black Catholic weekly, the American Catholic Tribune, in 1886. He died in 1933.