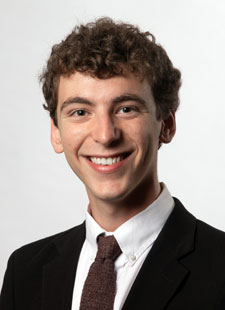 When I was little, my mother told me never to ask people about their religious beliefs or their political affiliations. So naturally, from a young age, I wanted to become a priest or a politician. I first had the idea in second grade. I was given a "pray for vocations" wristband and I refused to take it off for two years. I didn't know why.

Near the middle of high school, I had to write reflections for religion class, taught by Father Patrick Friend. One day during lunch, he called me over to him and I had no idea what to expect.

All he said was, "Do you know that your papers have ‘priest’ written all over them?" I gave him some smart response trying to escape the conversation. And to my surprise, it worked, but not in my favor. He told me to meet him after school. That is when I knew the real discernment had started.

That summer, I was able to go on a mission trip to the Dominican Republic. While there, our team ran a Vacation Bible School for the local children. I was assigned to teach the children about the Bible because it was determined that I possessed the best Spanish skills of the group, even though it was limited. At first, I was a little disappointed that I wasn't going to be playing games with them or sing songs, but after praying, I realized that I was doing God's work. That is what really mattered.

Near the end of the trip, I chose to teach the children about John 1:1, "In the beginning was the Word, and the Word was with God, and the Word was God." I had read this verse before, but never in Spanish. While reading it aloud, I paused. I took a deep breath and a tear filled my eye. I felt a peace I had never felt before.

The storm to which I had become oblivious had calmed. It did not last long, but at that moment, I knew I was doing exactly what God wanted, and I knew that I was being called to Spanish ministry.

I felt the same peace a second time only a few months later. It was a Tuesday in December and Catholic High was closed. On our day off, my best friend and I went hiking. He asked me about how my discernment was coming along. I told him that I was torn and why. I was sure that if I attended normal university, I would feel a constant nagging in my heart that I was being called to discern in seminary.

My best friend says very little and has never pressured me into doing anything, but when he does speak, it is always heartfelt. He looked at me and said, "You should go to the seminary." I knew that this was the calling long ago, but I was not willing to respond. I knew what God was telling me through my friend.

As I am in my second year of formation, I affirmed that I am where God wants me to be right now. I have also solidified my love for ministry. Ministries have offered me the great opportunity to deepen my love for the people of God as well as my love for him.

This year, I am studying philosophy in Washington D.C. at the Theological College of the Catholic University of America. As my process of discernment continues, I thank everyone for their help and prayers along the way.

If you wish to contact Samuel Ray, please e-mail Georgina Pena in the Vocations Office or call her at (501) 664-0340. This article was published Aug. 10, 2022. Copyright Diocese of Little Rock. All rights reserved. This article may be copied or redistributed with acknowledgement and permission of the publisher.